Lidl, the global discount supermarket chain based in Neckarsulm, Germany, will be building a large distribution center in the city of Oosterhout. In 2016 the company bought a plot of some 16 hectares at Park 15, the large industrial park along the A15 highway. This will be the seventh distribution center for Lidl in the Netherlands. Their most recently opened center, in Waddinxveen, opened at the end of 2016 and employees some 350 personnel. Even though Lidl has not yet announced how many positions will be available at the new location in Oosterhout, a comparable boost for the local job market is expected.

By using the latest developments in the area of sustainable energy, Lidl expects to provide all its own energy needs. Spokesperson for Lidl Christine Braun says, “When the plans for building are complete, we expect to match our Waddinxveen location by achieving the highest BREEAM-rating for Oosterhout. Sustainability is in our DNA. Oosterhout won’t merely be a distribution center; it will be the most sustainable of its kind. We are doing everything possible to make sure that our people, as well as the local flora and fauna, are cared for as well as possible, now and in the future.”

Oost NL played a facilitating role in helping Lidl choose a new location. It plans to continue to play a supporting role, for example in working with city governments in providing personnel. 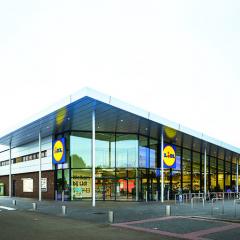