Thern Inc. is a family business from Winona Minnesota, the Mid-West region of the United States, which opened a European branch in 2017 in Almelo. Thern has an extensive range of lifting and handling products which are produced in their own factory in Winona. The company has a reputation of offering highly reliable, powerful and sustainable solutions for the relocation of cargoes of all shapes and sizes.

Thern’s cranes and winches are applied in various industries like aviation, the oil and gas industry, manufacturing industry, water treatment and so on. From the winch that lowers the Times Square Ball each New Year’s Eve, to the products in the recently delivered One World Trade Center.

To make a start in the European market, Thern hired the Almelo-based company EuroDev in 2005. When the time was ripe for a European establishment, NFIA Chicago joined the effort. They offered Thern Inc.’s CEO support with the European business case, and provided information on possible entities, tax matters and operational costs. For this, Thern Europe BV’s director was helped also by local accountants and lawyers.

Oost NL contacted the management of the Dutch branch, provided information on regional networks, subsidies and regulations concerning the training of personnel, and introduced Thern to the municipality of Almelo. In Almelo, Thern Europe BV was able to rent office and warehouse space from a local entrepreneur on the Business Park Twente, from which a team of five persons continues to develop the company’s European ambitions. 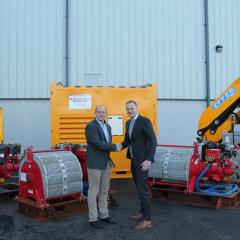