Aebi Schmidt, manufacturer of gritters and sweeping machines among other things, is expanding its plant in Holten. The company is moving its SK660 activities from southern Germany to Overijssel, where it will produce this new model of sweeper. With the expansion of the location, the company will eventually create about 25 additional jobs. On Monday 17 May, the company showed a Schmidt SK660 sweeper in the presence of Eddy van Hijum, deputy of the province of Overijssel, and Wendy de Jong, managing director of Oost NL. 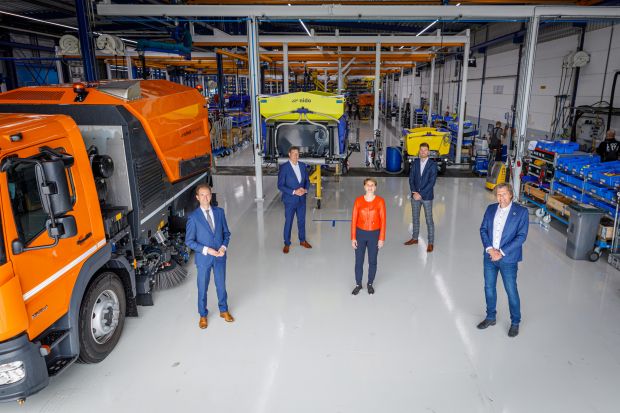 Eddy van Hijum: "It is good for employment that Aebi Schmidt is expanding in Holten. The associated investment indicates that the company is committed to this location for the long term. With more than 230 jobs, Aebi Schmidt will become an even more important employer in the province of Overijssel."

Aebi Schmidt has been located in Holten since 1939 and is known for its Nido gritters that are used to combat winter conditions. With the new expansion, the company is setting up a new assembly line for the production of a new modern sweeper. This 'SK660' is a truck-mounted sweeper. In addition, the warehouse with related logistics processes for the gritting machines has also been completely rebuilt.

The expansion is fully in line with Aebi Schmidt's sustainability vision, Arjan Ester, CEO Aebi Schmidt Nederland, says. "We apply the Circular thinking on the production side with producing only on customer order, using alternative energy and taking chain responsibility." As chairman of BOOST Smart Industry Oost-Nederland, Ester also feels it is important to be able to remain an example for the manufacturing industry in East Netherlands.

Peter Krook, Head Plant Netherlands: "We are proud to build this and other machines. We expect the expansion to be fully completed by November 2021. It is great that we were able to convince the head office in Switzerland that this is the location to produce the SK660 sweepers, and this in a rather dynamic and uncertain Corona time. As a production site, we have demonstrated through a redesign that more turnover per square meter can be achieved through smart manufacturing. With the successful transfer of the Wasa sweeper in 2019, the tone has certainly been set here. Oost NL supported us together with the Netherlands Foreign Investment Agency (NFIA) in the expansion. They also helped us to strengthen our network and put us in touch with experts who advised us on the various subsidy options," said Krook.

Oost NL supported the Holten location, among other things, by providing strategic input on productivity compared to other countries. It was partly because of this that Holten was eventually chosen as the production location for the sweeper. Wendy de Jong: "It is no coincidence that a beautiful international company like Aebi Schmidt chooses our region. The East Netherlands offers the space to grow and the talent to build the machines. High-quality manufacturing companies with an eye for sustainability are an enrichment for the region." 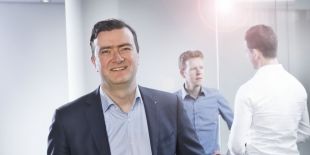